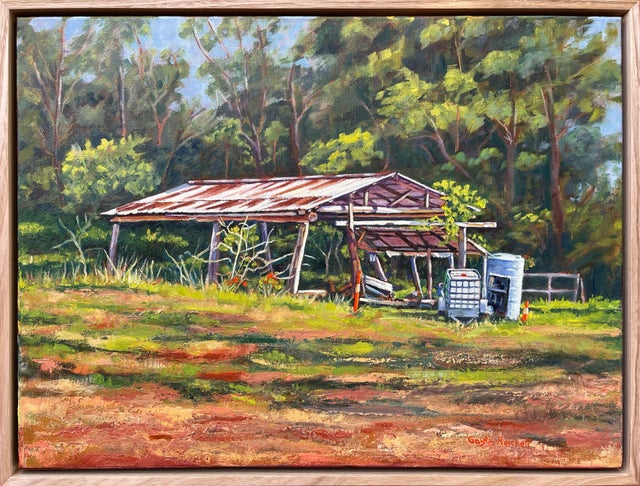 Rayner Sawmill is a heritage listed sawmill that was owned and operated by the Raynor Bros in the Monaro and outh oast aread of Queensland for 100 years. The original mill is now located in Springbrook Road, near Hardy's Road, in Mudgeeraba in the Gold Coast, Queensland.

Add to Cart
THE SAWMILLING RAYNERS

William Charles Rayner and family migrated to Australia on the “Northbrook” which took 6 months to arrive in 1878 as free settlers. The tickets cost five pounds. As he was a fitter and turner he moved to Kempsey where he worked at a sawmill for four years, from there he moved to Goulburn and then on to Cooma.
While in Cooma he installed the first steam boilers in the Cooma Hospital and the Cooma Jail. In 1884 the family moved to Jindabyne and built a flourmill, where Mr Rayner installed all the boilers and machinery.
The next move was to Montgomery Park, south of Nimmitabel where he built a sawmill for Mr Montgomery which was worked by about 20 Chinese people, later William Charles bought this mill and moved it bit by bit to Devil’s Hole, north west of Wyndham. During this time he started a machine shop in Cathcart, here he imported English sewing machines and built push bikes for Malvern Star.
In 1886 they moved to Boroma, now known as Kameruka, these moves were all done by horse teams. His last move was to “Myrtle Creek” halfway between Candelo and Wyndham where he built another sawmill. Grandfather George could remember arriving there riding behind his father on horse back on his 5th birthday. This mill was worked for ten years, and then when timber became scarce, he erected a new mill at Mutaganah Creek. With his sons all working the mill and William Charles driving the engine, the boiler exploded and he was killed instantly, his son George was badly injured.
William Charles was a very careful man, and the cause can only be guessed, but no blame was attached to anyone and he is buried in the Wyndham cemetery. George his son recovered and formed the original Rayner Bros Partnership and carried on the saw milling industry. George married Ethel Robinson of Wyndham in 1903, they had eleven children, Lorna Turner, Eunice Silk, Elizabeth Cootes,  Bert, Keith, Rupert, Murial Toms, Nola Gailey, George, June Kearnes, and Rodney.
In 1904 they went to New Zealand where he stayed for 2 and ½ years, he then returned to Wyndham and started a mill, later he went on to build mills at Bateman’s Bay and Moruya and managed mills for A & E Ellis at Berry, Lake Conjola and Red Head.
In 1921 George went to Brown Mountain but the mill was destroyed by fire, he bought Burke’s mill at Mt Darragh, and in 1931 moved to Bombala, this was the end of the horse teams. With the machine age arriving he purchased 2 crawler tractors and 2 Fargo trucks for log haulage.
War broke out in 1939, and son Bert was left to run the Bombala mill while Keith, Rube and George served with the AIF (Australian Infantry Force). He then moved to Granville and built another mill, he purchased an orchard at Kurrajong and built another mill there. He was 62 years old when he sold his holding at Kurrajong, and purchased a farm at Wilberforce on the Hawkesbury River. He sold his sawmills to his sons, and in 1959 retired to Merimbula, George died there in 1968, his wife Ethel died in 1976.
After the war the boys got together and formed Rayner Bros. They decided to build a mill in Nimmitabel to utilise the timber they knew was in the Brown Mountain, and to cut timber for the SMA and Canberra markets. Keith, George and Rod ran this mill; they were later to buy a mill at Adaminaby, which George managed. They had a timber yard in Cooma, which Rube looked after. These mills were run for many years and were good employment for many families, and good for the district in many other ways.
Rayner Bros were foremost in many local projects, such as the Bowling Club, and were very supportive raising funds when the Hall was renovated.
In the early 70’s they decided to sell their mills and go their own ways. Keith, Bert and George have since died, Rube lives in Ulladulla and Rod lives in Tathra.
THUS ENDED 100 YEARS OF SAWMILLING ON MONARO AND SOUTH COAST AREAS BY FOUR GENERATIONS OF RAYNERS.